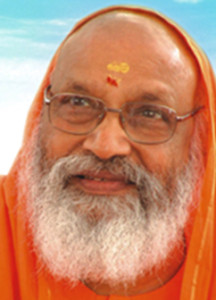 Swami Dayananda Saraswati, from the very first moment, has been very enthusiastic about the initiatives being taken by Dharma Civilization Foundation. He has taken a keen interest in the Foundation’s activities, and has guided DCF to take up a comprehensive relationship with the Graduate Theological Union, Berkeley.

Swami Dayananda Saraswati is a profound thinker, philosopher, teacher and writer. From humble beginnings in Manjakkudi, a village on the Kaveri delta, in 1930, he is today a world renowned spiritual leader. He has taken centre stage at the United Nations, ordained hundreds of disciples dedicated to teaching Vedanta, founded Arsha Vidya Gurukulams in India and the US, and created students spread across the world, from Australia to South America, from Canada and the US to the Reunion Islands. The list would by no means be exhaustive.

A sweeping look at his contribution to humanity as a whole, encompasses many dimensions – Strengthening spirituality as a civilizational value; Continuing and strengthening the great teaching tradition of Vedanta; Creating an official voice for Hindu consciousness, through the Hindu Dharma Acharya Sabha; Striving for mutual respect, equality and freedom for all religions through dialogues at the international level; Promoting the understanding of diverse cultures as the key to global peace; Creating avenues to reach help to people in need in rural and tribal areas of India; Initiating projects to strengthen Vedic dharma and culture; Truly, Swamiji is a modern master, whose concern and vision encompasses the individual, the nation, and the world.

If compassion, intellect, erudition, wisdom and quiet self-assurance, imbued with humbleness, were to take a human form, then it would certainly be Swami Dayananda Saraswati.

Swamiji does not believe in a centralized organization, encouraging his large circle of disciples and devotees to think for themselves, to be who they are. He says, “Only when we give freedom to others, can we be really free.” His clarity of thinking enables him to view a topic from different points, objectively, without prejudice or emotional bias. In his teaching and meditation sessions, he focuses on developing objectivity, and reducing subjectivity. He defines a wise person as “one who is totally objective, doing what needs to be done.” The power of his concepts, communication skill and non-judgemental nature inspire each person to give of his or her best.

His commitment to the Vedic tradition reveals itself in his initiatives and activities, through the teaching centres, the apex federation of Hindu religious leaders, service ‘organisations’, social and cultural projects. Among his many contributions to the teaching tradition, the Bhagavad Gita Home Study Programme requires special mention. Serious spiritual seekers, even in the absence of teachers or teaching facilities, benefit immensely from these volumes. For the younger generation, the Vedic lifestyle and culture are interestingly presented in a series called ‘’Purna Vidya’’.

Swami Dayananda Saraswati’s efforts to strengthen Hindu dharma led him to bring together all the Heads of Hindu Religious Organizations and Sampradayas i.e. traditional mathadhipatis and mandaleswars under the umbrella of the Hindu Dharma Acharya Sabha.

This was a historic first in the history of Sanatana Dharma. Travelling across the length and breadth of India, he personally met the heads of the various mathas, and  convinced them of the importance of establishing a body that could function as the official voice of Hindu consciousness.  Swami Dayananda Saraswati’s range and scope of work, encompasses many fields and disciplines – He has spoken at the United Nations, Millenium summit; Founded the All India Movement for Seva (AIM for Seva);  Established the Dharma Rakshana Samithi for the promotion of Vedic Culture; Organized the Saraswati river conference in New Delhi; Fomulated the Tirupathi Declaration of the Hindu Dharma Acharya Sabha; Created the Hindu – Jewish Summits; Promoted Hindu – Buddhist dialogues; And in each succeeding global conference, he has persevered to establish and promote mutual understanding and respect for all religions and left his mark on the resolutions passed. Indeed it will be a major task in itself to explore the range and scope of his impact on the world.

More about Swami Dayananda Saraswati and his work:

The Ashram
at Saylorsburg, PA
www.arshavidya.org

The Ashram
at Coimbatore, India
www.arshavidya.in

The Ashram
in Rishikesh, India
www.dayananda.org

The Ashram
in Nagpur, India
www.arshavidya-nagpur.org