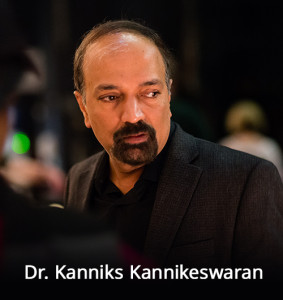 Dr. Kanniks Kannikeswaran, is an award-winning visionary composer, music educator, scholar and thought-leader whose path breaking work in the area of Indian American choral music uses the transformative power of music to build diverse communities. All of his creations are consistent with his vision of building community through the celebration of threads of commonality across cultures. Often referred to as ‘The Magical Musician from Madras, Kanniks’ skill lies in his ability to create captivating music easily accessible to a broad audience base, blending complex features of diverse World Music forms.

Kanniks is credited with creating a new sound; the coming together of Indian voices with traditional western choirs. In doing so, he has chartered new territory. The Indian-American choral movement that he pioneered has led to the founding of Indian diaspora choirs in several cities such as Cincinnati OH, Bethlehem PA, Livingston NJ, Tampa FL, Fort Lauderdale FL, Houston TX, San Jose CA, Los Angeles CA, Minneapolis/St Paul MN, Toronto ON, Chicago IL, Atlanta Ga, Washington DC and more in North America. His work spread to Europe where the first ever Surinamese-Hindustani choir founded under his leadership performed his work ‘Ragas in Symphony’ alongside the prestigious Dario-Fo Dutch choir and the Residentie Orkest in the Hague, Netherlands. His recent work with children from the Dharavi area was featured as the finale of INK Talks 2015 in Mumbai, India. Kanniks is the founder of Greater Cincinnati Indian community choir, which won two silver medals in the prestigious “Champions Category” in the 7th World Choir Games held in the United States for the first time in 2012.

His  opening invocation ‘Mahavakya’ was performed by his daughter Vidita Kanniks at the historic reception accorded to the Indian Prime Minister at Madison Square Garden, New York in 2014 and his anthem for the Indian diaspora in Sanskrit opened the Indiaspora Conference in 2015. His magnum opus ‘Shanti – A Journey of Peace’ a contemporary oratorio for large mixed choruses of more than one hundred singers, western chamber orchestra and an Indian instrumental ensemble recently completed its 10th anniversary and has enabled diverse coalitions between academic institutions, Indian communities, mainstream American and European choruses and professional symphony orchestras.

Other choral/orchestral creations of his such as ‘Chitram – A Portrait of India’ (hailed as an “extraordinary educational program created with the finest sense of aesthetics”) ‘Sharad – A Musical Celebration of Autumn’, ‘The Sound of Seasons’ , ‘Colonial Interlude’ and ‘The Silk Road’ have built communities around music. Kanniks’ work has personally touched the lives of more than 2000 performers around the world.

Kanniks has collaborated with the Cincinnati Chamber Orchestra, the Cincinnati Pops, the Martin Luther King Chorale, the Dario Fo choir, the Residentie Orkest (Netherlands), the National University of Singapore Symphony orchestra, the National University of Singapore Indian Instrumental Ensemble, artists such as Lakshmi Shankar, Mallika Sarabhai, the Gundecha brothers and others. 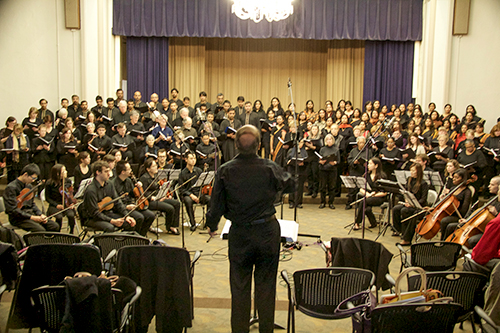 Kanniks has done path breaking work in bringing the legacy of the  little known genre of nottusvara sahityas (music based on popular western melodies of the Colonial period) of master composer Muthusvami Dikshitar to the world community in a highly acclaimed recording featuring Indian voices and Celtic accompaniment.  This recording ‘Vismaya – An Indo Celtic Musical Journey’  featuring the first ever compilation of the 39  compositions of Dikshitar in this genre, has earned wide acclaim. Dr. Pappu Venugopala Rao of the American Institute of Indian Studies has described this album as ‘a marvelous effort and a recording to be owned and cherished by every musician…’. His other recordings include ‘Tiruvarangam’ (1992), Banaras (2005), Tamil Marai (2005) and more recently ‘Shri Saradambam Bhaje’ (2015).

His work has been widely reported in the Cincinnati Enquirer, the Indian Express, and several other newspapers. Kanniks was interviewed on NPR in 2014 and was featured on Ohio Think TV in 2013 and in TedX in 2015. He is the recipient of several awards such as the McKnight Fellowship, the Ohio Heritage Fellowship, the Just Community Award, a lifetime achievement award from the Geeva foundation and the SRGMPDN Forum, the Humanities Award from the Hindu American Foundation and more. He has received support from the Ohio Arts Council for his teaching of the traditional arts and for his productions.

Kanniks has been teaching Indian Music at the College Conservatory of Music, University of Cincinnati as an Adjunct Faculty since 1994. His award winning research and his recording of   Indo colonial music of the 1800s is beginning to have an impact on Indian musical pedagogy. His Doctoral work explored the intersection between the music of the South Indian Composer Muthuswami Dikshitar and Colonial and North Indian music.  He regularly presents his scholarly work  at the Annual Conferences of the Society of Ethnomusicology (USA) and the Madras Music Academy. Kanniks has been described as a renaissance personality who effortlessly traverses diverse disciplines such as music, spirituality, and management. Kanniks is a powerful speaker and has lectured extensively on Indian culture and music all over the United States and in many other parts of the world. He is the founder of the American School of Indian Art, an institution committed to bringing the best of the East and the West to the Indian-American diaspora and beyond.

Kanniks ceaselessly inspires people through his passion for music and his commitment to empower individuals and societies through music. He stands for the possibility of bringing widespread awareness of the depth and breadth and the non-denominational spiritual core of Indian music and culture amongst the Indian diaspora.  He holds a PhD in Music from the University of Madras, Masters Degrees from the University of Cincinnati and a B.Tech from IIT Madras (1984) ; he lives in Cincinnati OH with his wife Jayashree and daughters Vidita and Sukhita.

Watch an Interview with the Composer